I had the pleasure of having Mike Rooney do some playing for me on some demo clips. Mike is a longtime friend and actually owns Scarlett amp #2 The Rhianna 60.  On each amp he played my Les Paul and my Tele, both of which have pickups I wound. He went for several different tones on each amp from Dirty and clean. 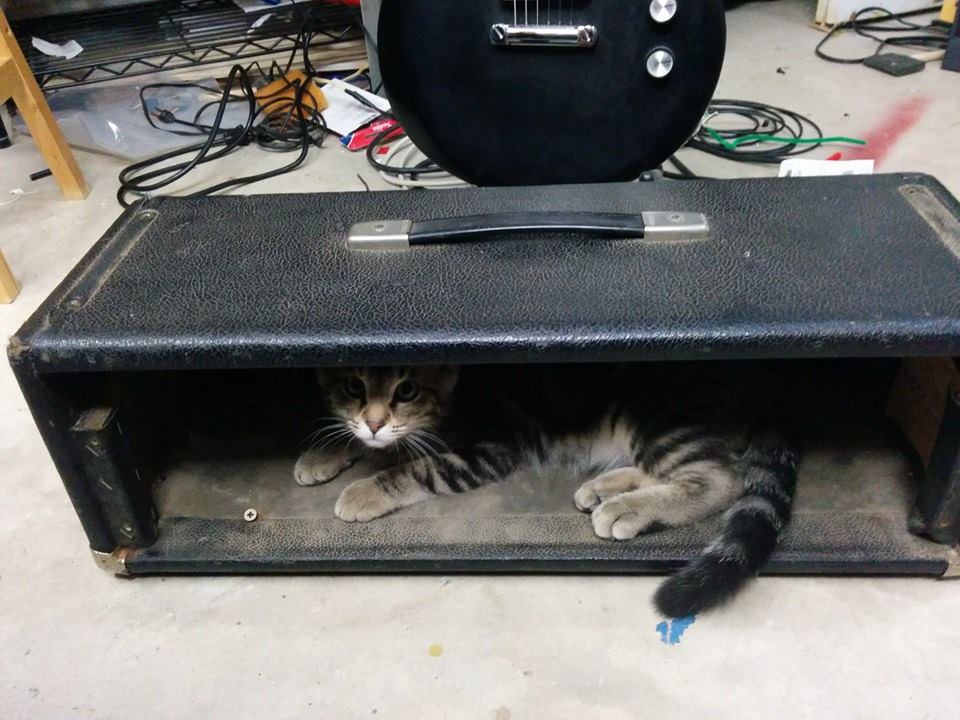 Here are some reviews from our Customers!


Screw all those vintage amps. Sell ‘em and buy a Scarlett! After sending a number of my vintage amps to Paul for repairs, I decided enough was enough. Nobody can “hear” vintage. They can only hear great tones. So I let Paul do what he does best - create a handwired amp based on the tones I loved the most, but with that signature Scarlett Amps vibe. My Scarlett Junior goes from chime to grind all at an insanely reasonable volume. The tone knob is one of the most interactive I’ve ever had. Simple, handwired and 18 watts of fun that goes from clean to funk to punk. I even played a show where my pedalboard shorted out. So I just plugged straight into the Junior and used the volume control all night. Crank it up for leads and fuzz, back down for rhythm, clean and funky sounds, turn it to 12 for instant feedback. It made for a fun night that really showed the versatility of this amp. As with all Scarlett Amps, it comes with a lifetime warranty. Not that you’ll need to use it. The Scarlett “Scout” is a dream amp. A totally handwired beauty that gives me all the best parts of my beloved vintage Bassman without the limitations. Crank the mids, drop the highs and lows, roll the volume to the sweet spot and my 330 was singing that coveted Grant Green tone. Set it all to the middle and start playing with the two very interactive volume controls and you get some great big sounds with just the right amount of dirt. Crank it up and hang on for dear life. Big, loud, classic, dirty rock and roll tones that sound like all the reasons I play guitar but with a voice of its own. The master control is Paul’s unique design. I can’t explain how it works, it just does. And knowing my love for pedals, this thing was built with exactly that in mind. A great platform for dirt, more dirt, a few fuzzes, plenty of reverb and oscillating, freaked-out delays. There’s nothing this amp can’t do. The lifetime warranty is nice, but unless you drop it off a 12 x 12 cabinet stack, I doubt you’ll need it. Even then, something tells me this can take it. Marsha, Marsha, Marsha. This little amp was something Paul threw together on a whim. Lucky me … I ended up with it. This is everything a recording amp should be. Swap out tubes at will and just turn it up. I had it cranked up full an entire day of recording and got that amp about to explode tone that’s been on so many albums, but in a super controllable way. It ran full tilt for hours and never once gave up or asked for a break. Paul builds amps that are made to roar for days and not worry if they’re going to collapse under the pressure. With a solid PA, this thing is a dream at shows. Just sweet, singing tones.

Five stars. Paul at Scarlett has done a fair amount of work on amps and pickups over the years. He's even in the process of building me a 20w Scarlett head. The one thing you can say about his products is how consistent the quality is. Paul is pretty meticulous in how he approaches his builds. Everything is hand wired here in Kansas City. He will sit and LISTEN to what your tonal needs actually are and craft his product to fit perfectly. He recently effectively brought a "spare" Les Paul that I played very little because it's PUs were weak in comparison to my main LP. I handed it to the evil genius and he rewired the PUs. Holy sh*t. It's now the best sounding guitar I have ever played. Point is: He listened to what I needed out of the guitar and he made it happen. I want a low (20w) amp head to play local clubs that has an early 70s JMP vibe. Where did I go? You guessed it: Paul at Scarlett. Can't wait to hear it. If you want a great local product - on par with Boulevard Beer and Joe's KC BBQ - look no farther than Scarlett. Serious quality and monster tone.

Comment
Having a love for old amps is a blessing and a curse.
I have a '72 Hiwatt that was a basket case when I got it, thankfully Paul resurrected it for me and it is back to deafening audiences all over.
I'm also a huge fan of his Scarlett amps.
So much so that we worked together on a one-off custom build we've named "El Jefe" and it's truly great.
I've yet to test drive one of his builds that I didn't complete fall in love with.
From the Screamers to the Scout, all are solid builds and true tone machines.
We even used the Scarlett bass preamp on a recent recording and it sounded amazing.
The boutique marked is flooded with a ton of amps...some good, and some are garbage.
Paul is making amps that he can be proud of and you would be thrilled to own without going broke doing so.
They're fucking good amps. Period.


Comment
Paul is the MAN!! Totally brought my JCM 800 back from the dead and breathed new life into my Laney AOR 100. I won't let anyone else touch my babies ever again. PLUS: he's a total straight-shooter and is game for new and creative projects. Our singer had three vintage Shure mics. So much mojo but unusable on stage. Until, that is, Paul installed some modern capsules and components in them!!
Scarlett!!!

Comment
I had Paul work on my 76 Marshall JMP. Not only did he do a great job, he was timely and reasonably priced. I also had a friend from a touring band need a repair on his amp and after we dropped it off, Paul drove the amp to the venue and dropped it off. Class act that is highly recommended for any repairs. If you haven't heard one of his custom amps, you're missing out!


Comment
I have used Paul Marchman at Scarlett to service my Mesa Impulse and I was very happy with the work and the turn around. As a gigging musician , that is a plus. He is my amp tech.


Comment
The Scarlett Scout is hand's down the best amplifier i have ever owned. Working with Paul couldn't have been any easier. From picking custom cosmetic odd's and end's, to the final result. I was just left with one question. Why didn't I own this amp sooner?


Comment
I brought Paul a nightmare of a repair job where someone had done some very dangerous things to a really cool old Sunn amp and he really went above and beyond. Super fast, WAY cheaper than I thought it would be, and the amp is now a tank. Best repairs guy in the biz.


Comment
Paul Marchman of Scarlett Amps did a fantastic job of restoring my early 80's Marshall JCM800. It probably didn't sound this good new . . . and no, it's not for sale!
- Roger Pitts


Comment
I hired Scarlett earlier this year to convert a Fender Pro Jr. Paul worked with me to understand the sound I was targeting and then tweaked his circuit design to make it perfect, also providing guidance on a complimentary speaker for this application. The results are fantastic - more headroom, no noise, and gain kicking in at 3 o'clock up. Just how I wanted it.
When I learned Paul also did custom pickup work, I had him rewind my 94 firebird pickups and replace the ceramic magnets with alnicos. It now sounds just like a '64!

It's great to know that we finally have a world class amp builder and repair organization in the KC area. Paul repaired my fried Silvertone 1482 in record time. He was totally professional, figured out a creative way to fix it that saved me hundreds. I'd recommend him to anyone. (Now I want to hear his custom amps)

So all I can say is, wow, this thing just flat out rocks! A handmade work of art, really. The voicing is completely unique to me: warm and full and round across the whole frequency range. There is a startling clarity that shines through the grit and growl that cuts through the rest of the band like no amp I've every played. I say startling because ALL the notes come through. Including the wrong ones! which is really going to make me a better, more concise player. Love it!!